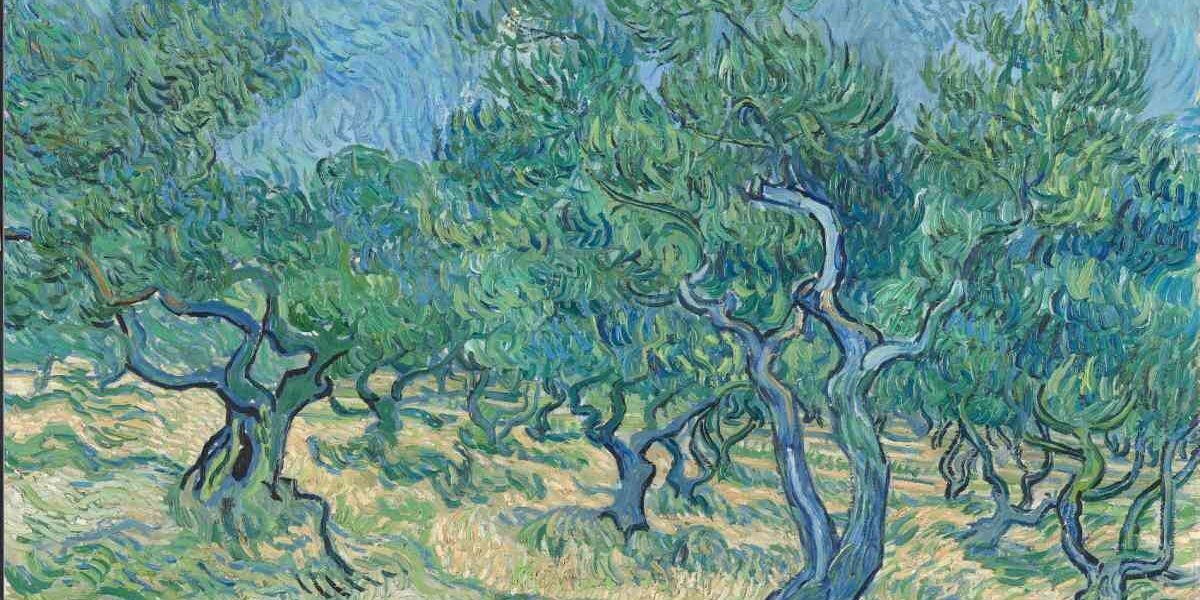 From 11 March, the Van Gogh Museum presents an exhibition focusing on the fifteen paintings of olive groves that Vincent van Gogh made in 1889 in Saint-Rémy-de-Provence. The painter himself believed these works to have been amongst the best he had made in the South of France. Thanks to exceptional loans from museums in the United States and Europe, this important group of paintings is now reunited and exhibited together. Highlights of the exhibition include Olive Trees (Minneapolis Institute of Art), Olive Grove (Gothenburg Museum of Art) and Women Picking Olives (Basil & Elise Goulandris Foundation, Athens). Van Gogh and the Olive Groves is a collaboration with the Dallas Museum of Art.

Emilie Gordenker (Director of the Van Gogh Museum): ‘This exhibition is the result of years of intensive research and is a rare opportunity to see this group of works together. These extraordinary paintings convey Van Gogh’s love of nature and his belief that art can offer comfort’.

The asylum in Saint-Rémy-de-Provence, where Vincent van Gogh (1853-1890) stayed for one year, was surrounded by olive groves. Soon after his arrival there Van Gogh was immediately fascinated by the gnarly shapes of the olive trees and the play of light on the colour of their leaves. Between June and December 1889, he painted a significant series of fifteen paintings, capturing the olive groves at various times of the day and in different seasons. In his search to discover the typical characteristics of the olive tree – that to him, characterised the Provence – he experimented with expressive colours, lines and forms.

He wrote: ‘the olive trees are very characteristic, and I’m struggling to capture that. It’s silver, sometimes more blue, sometimes greenish, bronzed, whitening on ground that is yellow, pink, purplish or orangeish to dull red ochre. […] And one day perhaps I’ll do a personal impression of it, the way the sunflowers are for yellows’. (Vincent van Gogh to his brother Theo, Saint-Rémy-de-Provence, 28 September 1889)

Van Gogh and the Olive Groves – Comfort in nature

Van Gogh and the Olive Groves reunites this important series of paintings for the first time. The exhibition presents 25 paintings and drawings that show Van Gogh’s intense personal and spiritual attachment to olive trees, his changing painting style, his ambitions when painting olive groves, and his unwavering faith in the comfort that art can offer.

The exhibition also illuminates Van Gogh’s habit of producing series of paintings with the same subject, and his approach to painting the olive groves: how he varied his colours, composition and brushwork, how he often worked not only outdoors, but also indoors in his studio, and how he made several versions of a single olive grove.

Van Gogh was suffering from severe psychiatric issues during his time in Saint-Rémy and found comfort in painting and in nature. In his paintings of olive groves, he wanted to express the calming feelings of eternity and unity that he experienced in the countryside. Van Gogh considered his paintings of olive groves to be amongst the best and most important works from the two years that he spent in the South of France. He believed that modern art should offer comfort, and he saw the olive groves as his contribution to that new art.

Exceptional loans
Van Gogh and the Olive Groves brings together paintings from all around the world. Some of these works have never been exhibited here before, and others will return to the Netherlands for the first time in more than a century. These include exceptional loans, including Olive Trees from The Nelson-Atkins Museum of Art in Kansas City, which is Van Gogh’s first large painting of an olive grove in glorious summer weather. This work has never before been exhibited in the Netherlands.

The same is true for Olive Trees from The Minneapolis Institute of Art, one of the group of olive groves that Van Gogh painted in autumn 1889. This is the only composition in the series featuring the sun, symbolic of the bright light and the warmth of the Provence, and the mountains – which, together, create an impressive colour contrast. Another colourful highlight from the series is Olive Grove from the Göteborgs Konstmuseum. In the exhibition it will be reunited with the painting that it inspired, Olive Grove with Two Olive Pickers from the Kröller-Müller Museum.

An extraordinary loan is Women Picking Olives (Basil & Elise Goulandris Foundation, Athens), the work that Van Gogh himself believed to be the best in the series. This masterpiece was in private hands for many years and is now on display in the Netherlands for the first time since 1905.

International research
Van Gogh and the Olive Groves is a collaboration between the Van Gogh Museum and the Dallas Museum of Art, where the exhibition was held until 6 February 2022. Over the years, Van Gogh’s fifteen paintings of olive groves have become scattered around the world. Three of these works are now in the Van Gogh Museum collection, the others are in museums and private collections in Europe and the United States.

Given that the exhibition offers a unique, one-off opportunity to study Van Gogh’s paintings of olive groves, curators Nienke Bakker (Van Gogh Museum) and Nicole R. Myers (Dallas Museum of Art) established a partnership project to research all works in the series in detail.

In collaboration with conservators and researchers from the museums that are home to these works, Van Gogh Museum conservator Kathrin Pilz conducted comparative research into Van Gogh’s techniques, pigments and materials in this series. This research produced valuable insights into the order in which the paintings were made, Van Gogh’s use of colour and how he worked both outdoors and in his studio. The findings have been published in a scholarly catalogue, Van Gogh and the Olive Groves, Dallas Museum of Art/Van Gogh Museum (2021).

Supporters
The Van Gogh Museum is grateful for the generous financial support it received for this project. It is especially grateful to the Ministry of Education, Culture and Science, and its main partners: the VriendenLoterij, Van Lanschot and ASML. Van Gogh and the Olive Groves is also supported by the Mondriaan Fund, Monini, the Netherland-America Foundation and The Sunflower Collective.

Van Gogh and the Olive Groves is on display at the Van Gogh Museum from 11 March to 12 June 2022.