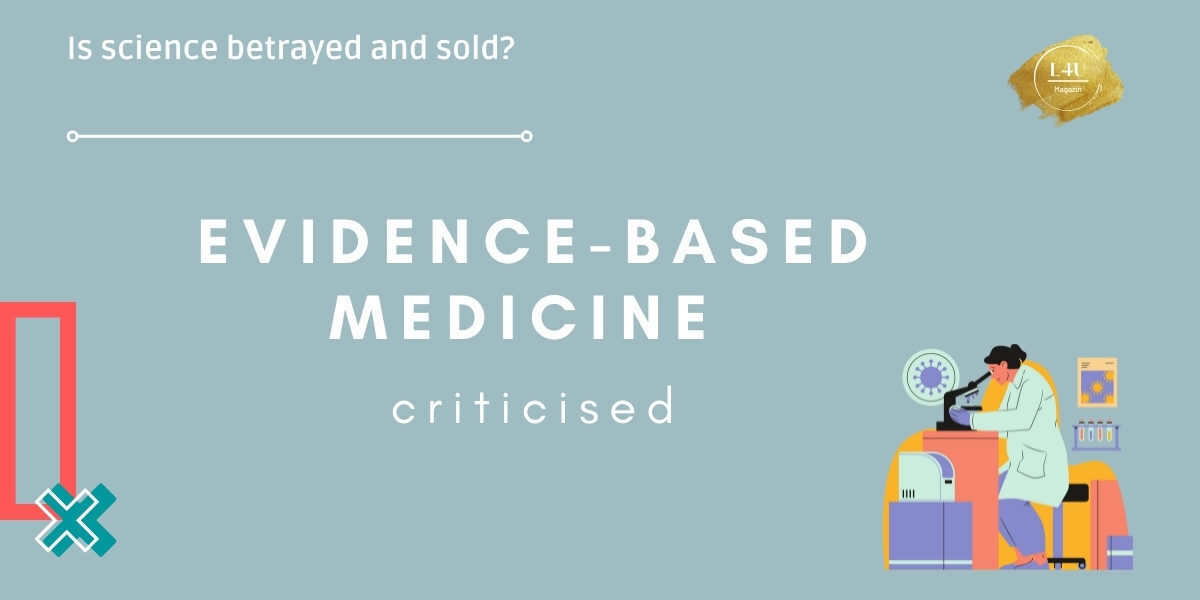 Evidence-based medicine under criticism – An article by Daniela Shams

In the present we have to ask: who cares about our health? The pandemic era has produced one thing above all: the global power of the pharmaceutical giants. Used for a seemingly worldwide crusade, evidence-based medicine is being (exploited) to reach every place in the world.

The science is not over, but has reached the chapter of evidence-based medicine in criticism. Because it looks like science has been betrayed and sold. To pharmaceutical giants who want to seize the claim to knowledge with all their might. The impact of this new philosophy extends to the latest developments between vaccinated and unvaccinated people.

When the pandemic began, it was clear that this strange virus would be followed by compulsory vaccination. There had been signs of this for several years. With almost 30 years of experience in the field of vaccination, you recognise the scaremongering methods and communication strategies.

In the middle of the mass education psychosis

Spurned by the mainstream media are all those scientists, doctors, lawyers and others who find clear words for the present. There has long been talk of “mass formation psychosis”. It describes the experiences that vaccination critics have been living for decades. Not only the blind fear of the disease. New verbal structures are created to point the people in the desired direction. Breaking ranks is forbidden. People who are critical of medicine and vaccination are generally swept into a corner by the media, where no constructive discussion about side effects or long-term consequences is desired. Whereas we were previously in the probationary period, since Corona we have been experiencing an unprecedented mass psychosis.

Trust gambled away – Science betrayed and sold out

Writing about it was always extraordinarily difficult. Since the invention of vaccinations, criticism has been a sensitive issue. In this respect, the cancel culture has existed for a long time. In the 1980s, a book was published whose content was so explosive that the federal government pulled a rip cord: On one hand, the compulsory vaccination that had been in force until then was repealed with great fanfare. The consequence was that many young parents avoided vaccinating their infants.

Secondly, again very quietly, the possibility to inspect data in the Federal Statistical Office was removed. For the statists shown in the book revealed unmistakable trends: Vaccination campaigns often began at the lowest point of the curve, rise dramatically after the campaign begins, and then level off much more slowly. However, the increase in polio in Nigeria after vaccination campaigns shows that it is precisely in the wake of vaccination that new outbreaks of the disease are occurring.

In bondage to science to the bitter end

By locking up statistical data from the state side, journalists were denied important data. Statistics that could have provided answers and allowed conclusions to be drawn. In short, people were deprived of normal education, of talking about the pros and cons of vaccination. The basis for “side-effect-free vaccination” was given and has been used ever since – for several decades. The few people who addressed the issue of side effects end up persecuted like heretics in the dungeons of darkness. To be clear: This is not about vaccination itself, but about the way science and medicine communicate and are able to criticise.

Since the introduction of the Corona vaccine about a year ago, there has been an extremely high rate of severe side effects and even daily deaths. According to the latest statements from life insurance company OneAmerica, Scott Davison says the mortality rate for people of working age – between 18 and 64 – in the third and fourth quarters of 2021 is 40 per cent above pre-pandemic levels. 40 per cent

When did we give up independent thinking? We are witnessing a staggering faith in science that accepts every proposition without questioning. But isn’t that the whole point of science?

Hazards and risks could have been observed and studied in advance of science & medicine. How many people have lost their lives after rMNA vaccination against Covid-19? This question remains unanswered with the stale aftertaste of betrayed science in the room. Increasingly, doctors and scientists like Robert Malone are speaking out against widespread vaccination, especially in children. Even official statistics indicate that the rate of covid infection by multiply vaccinated people is staggering.

The day scientific data was locked away

Based on the data published in the book “Vaccination – The Business of Fear”, many parents decided against vaccinations for childhood diseases at that time. That was in the 80s. A significant increase in these childhood diseases (in the sense of dangerous epidemics and numerous deaths) did not occur. Even though these diseases sometimes appear. It is a “coming and going” as it was symbolically described by Dr Buchwald. Knowledge about this development is missing and has been pushed into the background bit by bit by the media in recent years.

The author of the book “Vaccination – The Business with Fear” * was Dr Gerhard Buchwald. At that time I was lucky enough to meet him. Every conversation was followed by more questions from me. His statements were reality-based and written from a medical perspective. With his views, he was one of the few doctors with critical objections to vaccinations. If science is not to be betrayed and sold, more such voices are needed!

Since the Corona pandemic, a term has been haunting society: evidence. It seems that science alone is no longer enough. If we look more closely at evidence-based science, one thing stands out: While science, according to Wikipedia, refers to the totality of human knowledge, evidence-based medicine relies on “patient-centred decisions that should be made, whenever possible, on the basis of empirically proven effectiveness”. Lots of conjunctives.

The claim of evidence-based medicine: omniscient, strategic and without error

All that is not problematic enough. For many years, doctors and psychologists have only been allowed to use therapies and treatment methods that are laid down in evidence-based medicine. This is where the cut into personal decision-making freedoms of doctor and patient already begins. The range of treatments is reduced from the outset. Alternative medicine is largely excluded. Regardless of the fact that Traditional Chinese Medicine, for example, has existed for several millennia. This explains why many therapies are not covered by health insurance. They are not in the circle of evidence-based medicine.

In clear words, this would mean: Evidence-based science is based exclusively on the results of its own clinical studies and current evidence. Over the years, a pharmaceutical elite has formed that is not only the market leader, but above all the spokesperson. Unfortunately, these studies do not depict a 360° perspective, but only provide answers to the questions/theses they pose themselves. At the same time, you permanently have the feeling that crucial information may be missing. Because people/patients want to be informed about pros & cons, about side effects and risks.

How far can we trust evidence-based science?

The small wheel of evidence-based science revolves mainly around the studies of big pharmaceutical companies. Now, unfortunately, it is precisely those in the past and present who have been cast in a bad light. The American pharmaceutical company Pfizer is named most frequently. Be it litigation of deadly tests of drugs or record sums ($2.3 billion) due to shoddy marketing practices that Pfizer had to pay. Do you actually trust companies that have been sentenced to heavy fines several times in the past for unfair practices?!

The latest outcry over lousy procedures within a clinical trial of the Covid vaccine came from Pfizer and was published by the medical journal BMJ. For a German summary, see the Science Media Center article. The question must be asked why governments around the world trust such a company. Whenever this nightmare is over, what is needed here is a comprehensive reappraisal of what happened!

Small medical companies have a hard time in the shark tank

Scientists or small companies that lack funding for clinical trials fall through the net. They are dependent on state funding or private investors. One example is the Brandenburg-based company Pentracor. Here, a worldwide new blood washing procedure was developed that could treat heart attack patients or covid patients sustainably and without side effects. However, Pentracor’s managing director, Dr Sheriff, “feels as if the German government has not yet heard about the winner of the Berlin Brandenburg 2021 Future Prize.”

” Who heals is right” – Evidence-based science clears the air

Evidence-based science is to a large extent nothing more than the official exclusion of other treatments or therapies. Therefore, it excludes alternative medicine to a large extent. The term “alternative” alone is not justified. Because methods such as traditional Chinese medicine or homeopathy are definitely out, the placebo effect can be officially confirmed. Regardless of the fact that naturopathy is far older than modern medicine, it falls victim to fading out. Last but not least, millions of people around the world use naturopathic procedures, without negative side effects.

Science can do more, must be able to do more!

Because with the help of the technologies available to us today, science can do more. It must be possible to develop therapies and medicines without side effects. It is quite possible that the profits of the pharmaceutical giants will then shrink. Right on! Because that would mean that more people are healthy.

Health may no longer be a business model

Health may no longer be a business model. It is up to politicians to change that. But this would require a worldwide medical revolution in which the wings of the pharmaceutical giants are clipped. Are we ready for a medical revolution?